I admit I’ve lost track.  There are so many “Generation this-that-the other” – Gen X, Gen Y, Gen Z, Millennials, Boomers, and Hashem only knows what else – that I can’t keep track.  We love to classify and put everything into bins.  So in light of things like this I want to propose GEN C.

Unlike the other ones I’ve named above, this spans all ages – but, by its title, has a common element running throughout.

We’ve all seen the masked as we go about our lives even as restrictions are lifted.  In stores, in the malls, walking alone by the side of the road, even masked while driving alone in cars.  People living in utter terror lest someone breathe in their direction.  I still see – rarely but it happens – people with double-masks and face shields, plus gloves, wiping down carts at the store like anthrax is on the loose.

Everywhere I go where masks are required for some reason, or there are barriers in stores, etc., I ask “When does it end”?  I’ve actually been banned from of a medical practice because of this.  Because “bullying” and “aggression” simply because I question the mask policy.

On a recent Sunday, as I drove the kids to their Hebrew / religious school, we stopped at a local convenience store for their snacks and bottled water.  Potato chips.  (Don’t tell my wife.)  And I asked the cashier – I am assuming that person was the owner – when their plexiglass shields would come down.

So I gather the products with my germy hands, hand them to you, you touch those products I’ve handled with your germ-covered gloved hands that have handled the last umpteen customers’ products covered with their germs.  You handle the cash I’ve handed you with those same gloves that, again, have handled prior cash, let alone all the hands that have handled my cash.  You handle the change you give me, then bag the products and hand the bag to me.  All through the open space of the shield that has air flowing all around… rubbing your nose briefly with your gloved hand… and you think you’re safe and protected?

My Synagogue still asks that people who haven’t been fully Jabbed not come in for service – a policy similar to most religious institutions in the area where I’ve actually delved in.  And while the masks are slowly going away they actively encourage Jabs, having had a clinic there.

Each and every medical practice I go to, whether for myself or for a kid visit.  Masks, only “approved” masks, make sure to pull it up over your nose!  Masks forever.

Now to be fair, earlier on in my life I, too, was a climate alarmist (links in the original; italics replaced with underlining):

I have a high IQ – above 150 last time it was tested.  (Aside: I read the book The Curse of the High IQ and in it found multiple stories & testaments that could have been pulled from my own life.)  I’m not bragging per se because I think IQ is a very limited measurement, but nonetheless, nobody who knows me, who has met and conversed with me would, objectively, think I’m stupid or uneducated.

I have two Master’s degrees, a couple of patents, and have been told by one employer that I was probably the most intelligent person who ever worked there.  (An aside: during a series of interviews at a company where the founder was a man who had the proverbial seven-league boots mentally, I overheard his right-hand man mention to him – after my interview with that subordinate – “No wonder he scares people, he’s just like you”!).

Nonetheless, as a person who has openly stated that I used to be a “climate alarmist” and now am a “climate change denier skeptic” I reflect on the fact that I can count the number of people who have asked why I’ve changed my mind on one hand.  With fingers left over.

As I have oft said here on the Grok (and elsewhere), I used to be a climate change alarmist but changed my mind. Note that I do not deny – who could? – that the climate changes but rather I find the case mankind is doing it unproven.

While there are multiple reasons for my shift from one side of that debate to the other, probably the single biggest reason – the “brick on the jeweler’s scale” – was the concealment of data that is rampant in the Climate Change Fraud.

Yet everyone is running around panic-stricken screeching OH NO!

Despite the fact that the earth has been far warmer, even in this interglacial period: 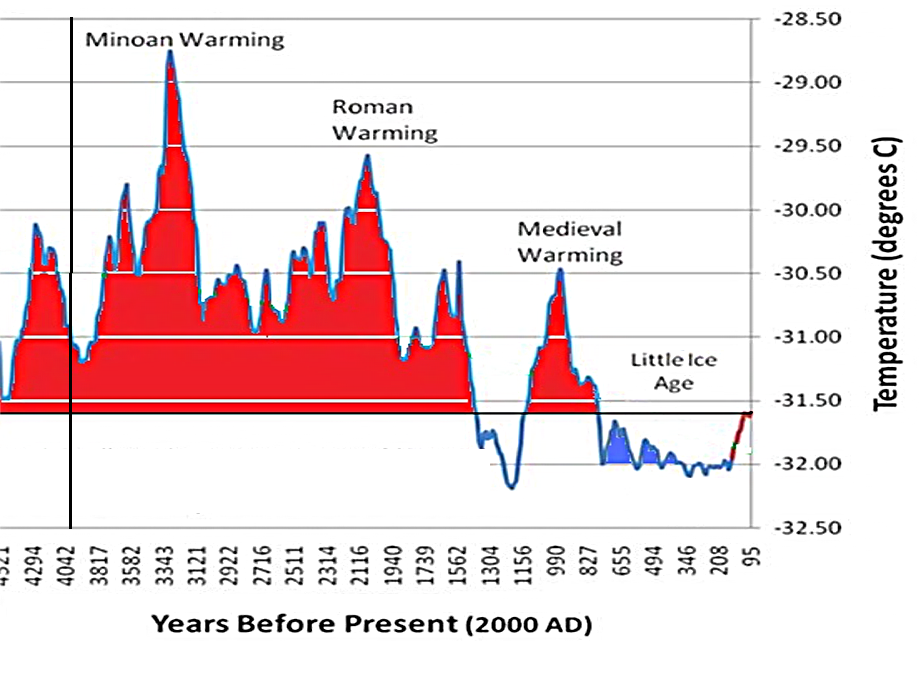 Side note: in a lecture I used to give back in my teaching stint, about the intentional misuse of data to make you believe something other than reality, I used to show a close-up of the end of this data set without any background or context.  I would ask students what they thought this was… then reveal that this is the temperature of the earth as measured by ice cores.  When I asked if this was a crisis I’d get universal head-nodding.

Then I’d pull back to show the entire thing.  Gasps, every time, as people realize they’ve been played.

As have CO2 levels through earth’s history:

I have had difficulty holding a permanent position.  Why?  Because I challenge.  I question.  I’ve actually been told at one place that:

You’re probably the most intelligent person who has ever worked here… and that scares a lot of people.

Similarly, over the years I’ve written – and had published – articles critical of current-day hiring practices.  Receiving acclaim by job seekers and some maverick HR persons, I have been uniformly told to SHUT UP! by management persons and HR professors.  So I ask a very simple question.  “So where am I wrong”?  The answer is invariably not an answer to my question, but merely a command to SHUT UP!  They won’t answer where I’m wrong, because I’m not wrong… but I’m the only one with the courage to question and to point out the naked HR / hiring emperor.

In fantasy series Incarnations of Immortality by Piers Anthony, in the book about evil, the protagonist who has just taken over the role of Evil has to find out how to banish demons into oblivion – this being the punishment that incarnation has over their demonic minions, the one dire Sword of Damocles threat held over their heads.  And he discovers something truly perverse: that there is no such power held by that incarnation, and that demons only cancel themselves because they believe the incarnation has the power to do so.

Now don’t get me wrong – people have lost jobs because of cancel culture.  But why?  Because of the cowardice shown by their management in not defending people.  Like the “power” to banish demons into oblivion, cancel culture only works because of cowardice.  If people, if management, said “My employee made a statement you don’t like on their own time, on their own private social media account.  You don’t like it… lump it”!

And it is that cowardice that makes people fall silent.  We have the right to dissent and disagree.  That Right is given by Hashem, not permitted by government.  As long as – in the workplace, for example – it’s polite discussions, what is wrong?  As long as it is someone, on their own time, on their own private accounts, expressing an opinion – what is wrong?  But the totalitarian Left can brook no dissent from The Narrative, and now it is fear that drives cancel culture, which – citing this great short piece by Stephan Molyneux – is a prelude for genocide.

THE INVERSION OF VIRTUES

Courage is the first virtue that makes all other virtues possible.

Such is the demonic, indeed, outright infernal twisting of what is good and right into what is perceived as wrong.  (Just as empathy for others has been twisted to force people to wear masks “to protect others”.)  Fear, certainly a useful emotion, has been amplified to overwhelm courage.

Only when we get this strength, the strength to refuse, to say NO, will society turn around. 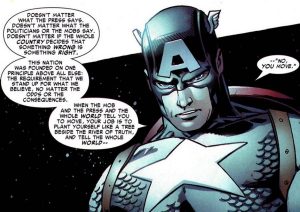 Be that tree beside the river of truth.  One voice – just one voice – with the courage is enough to break the spell.  Believe me.  No, follow the science. 🙂

Previous articleTommy DEPORTED Then ASSAULTED By Manchester Police
Next articleThe EU – The War MUST Go On!!!!