Tommy Robinson had a holiday booked to Mexico (Cancun) with his three children. He flew out of the UK on Friday with a friend who also took his children, when Tommy arrived at Cancun airport immigration staff took him aside, separated him from his children, and told him he was not allowed to enter Mexico as it was “a national security issue”.

Hold that thought for a moment….

Is Tommy Robinson a coyote, smuggling unaccompanied children across the US border from Mexico for child sex trafficking?

Is he a member of one of the many drug running cartels in Mexico – smuggling fentanyl, cocaine, marijuana, crack, heroin or arms across the US border?

Is Tommy Robinson a terrorist, giving reason for the UK government to alert Mexico City of his impending arrival so that he would be detained and subsequently deported?

The obvious answer to all of these questions is a resounding no. Tommy Robinson is none of these things, yet somehow, he suddenly becomes a national security issue for Mexican authorities?

One has to wonder how and why? 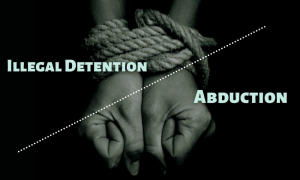 Tommy’s children were extremely upset (and still are for that matter), their father was arrested in front of them, separated from them, and detained for reasons of “national security”. Tommy has holidayed in Mexico a number of times in the past, he was allowed into the country, no flags raised, no national security issues alerting Mexican authorities.

So, what changed exactly?

Perhaps that’s something for you, the reader, to conclude for yourselves.

Let us also bear in mind that Tommy, allegedly posing such a huge risk, was actually allowed to board a flight in the UK and travel to Mexico in the first place.

After spending more than two days in legal limbo, detained as a Mexican undesirable, seemingly posing a massive threat to the Mexican state and its citizens, Tommy was eventually flown back to the United Kingdom where he arrived in Manchester.

While Tommy was waiting for his baggage, he was approached by officer Smith who somehow believed Tommy had committed an unspecified crime, posing a threat to airport security? State agent Smith then tackled Tommy in the baggage pick up area, essentially assaulting him in the process. Tommy was clearly confused at being targeted, he was also understandably outraged that he was being manhandled by officer Smith of Greater Manchester Police.

Luckily Tommy raised his hands showing he wasn’t posing a risk to anyone and remonstrated with the assaulting officer in front of a crowd of people who stood by in shock and disgust at the actions and behaviours of this officer.

One has to ask another question….

Why was Tommy targeted for some erroneous, spurious, “suspicion” that allowed this officer to “act within the law” and assault him in this way?

Was the purpose of this altercation, instigated by officer Smith, to make Tommy lose his cool, lash out, and get himself on a charge for assaulting a police officer?

If that was the intention, then the British authorities failed miserably.

It also begs one last question…

If Tommy Robinson is a national security risk, why was he not arrested as soon as he landed back in the UK for that exact reason? Why was some spurious, unclear “belief” he posed some kind of risk to airport security while waiting for his baggage potentially used to aggravate a situation that could have escalated, leading to him being arrested for assaulting a police officer?

So many questions and so few answers right now.

Maybe Manchester police would like to fill in the gaps for us?

A complaint will be made, however, because Tommy Robison is “person non grata”, an undesirable and a “national security threat” we don’t have very much faith in a police force that suffers with dishonesty and negligence from the top down.

For example, their many institutional and systemic failures to protect children from predatory child raping groomers.

Tommy can only truly relax, be himself, and enjoy time with his children, when he is on holiday with them, and it would seem that the British state decided Tommy does not deserve that time with them.

It is one thing for the British state to punish Tommy, he knows that is the territory he resides in, doing the work he does, but to punitively punish his children? That is abhorrent on all levels, you can hate the man for what he believes, for the politics he follows, for his speech even, but to persecute his children is lower than low.